ENCAMPMENT, Wyoming – Western Writers of America, a writers’ organization that since the 1950s has promoted literature of the American West, has announced the winners of its first “Tweet Us a Western” Twitter contest.

Participants were asked to write a Western (traditional, modern, poem, etc.) in 280 characters or less – the equivalent of one tweet – to compete for $500 in cash prizes. The competition was open to WWA members and nonmembers.

After judging nearly 50 of these “micro-Westerns” submitted to WWA’s Twitter account, the judges awarded screenwriter/film journalist Henry C. Parke first place for his colorful story of a gold prospector’s last moments; novelist R.G. Yoho second place for his account of a lawman’s mercy in “Justice Takes a Holiday”; and poet and nonfiction author Corrina German third place for her vividly poetic prose in “The Legend of Arland, Wyoming.”

“It was an extremely difficult task, and there were many deserving entrants,” said Kellen Cutsforth, WWA’s social media coordinator. “In the end, the judges chose the tweets they felt were unique and the most descriptive and entertaining.” 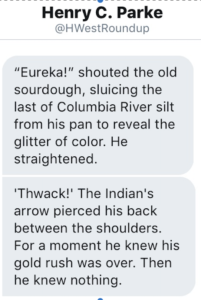 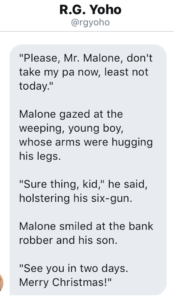 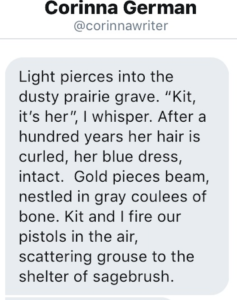