ENCAMPMENT, WY – Western Writers of America (WWA) has announced the release of a CD compilation featuring 14 contemporary songs from prominent Western songwriters and singers. Pen & Ink, Voice and Strings – Echoes from the New Frontier will be released at the organization’s convention in Cheyenne, WY, June 21-25. The recording features several Spur Award-winning compositions performed by many of today’s premier Americana singer-songwriters. In addition, many of the best-written Western songs of the recent past are included on the anthology. 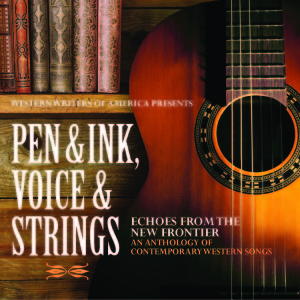 “Our board of directors has been considering the production of a CD featuring the best in Western music since the inception of the Spur Award for Best Song in 2008,” WWA president Sherry Monahan said. “WWA represents Western writers of every type, and songwriting has quickly become one of the most popular genres to express Western-oriented themes.”
The CD’s formal launch is scheduled for Wednesday, June 22 at the organization’s Welcome to Wyoming reception, to be held at the iconic Nelson Museum of the West in downtown Cheyenne.
Each of the 14 artists represented on the CD, along with their songwriting partners, contributed their work to the project, with proceeds supporting Western Writers of America’s mission to promote the literature of the American West.
Produced by WWA member and Western author/songwriter Jon Chandler, the collection spans the Western experience in song. “Producing this recording was a gratifying experience,” Chandler said. “As we say in the liner notes, Western music is alive and well. We carefully listened to and enjoyed dozens, if not hundreds, of songs, all of which were strong contenders to be included. After song selection, I contacted each of the artists and explained that we wanted to present listeners with exceptional songs that were both literate and literary. Each was delighted to contribute their work to this unique collection.”
The CD kicks off with the powerful lament for native culture by songbird Juni Fisher, Still Here, the 2012 Spur Award winner written by Fisher and noted cowboy poet Waddie Mitchell. Mike Blakely’s 2008 Spur Award winner, The Last Wild White Buffalo, has all the elements of a rousing short story wrapped up in his distinctive lyrics and melody.
Dave Stamey contributed his modern classic, The Vaquero Song, an evocative, spiritual tribute to California’s Mexican roots. Jim Jones’s Texas is Burnin’ is a pulse pounding, rootsy take on Texas history that was a co-winner of the Spur Award in 2013. The late Chuck Pyle’s estate contributed his classic, Colorado, an appreciation of his adopted state. Chandler’s 2012 Spur Award winner Morning Star Moon examines the lure of Wyoming’s Hole in the Wall country.
Gary McMahan’s The Old Double Diamond is considered by many to be the finest Western song ever written, and his live version is spellbinding. The raucous rodeo tune, Hang-n-Rattle! by Wylie and the Wild West is the 2010 Spur Award winner, written by performer extraordinaire Wylie Gustafson and legendary cowboy poet Paul Zarzyski. A lively, lovely song of the Southwest, Sky Rock, was contributed by WWA member and troubadour Carol Markstrom.
Bill Barwick, the Voice of the West, penned and performs his quintessential Western anthem, There Ain’t No Quit. Western phenomenon Mary Kaye’s moody yet rowdy tribute to Butch Cassidy, Any Name Will Do, was a Spur Award co-winner in 2013.
Lost Time on the Old Highway, by the Mark Jackson Band, is Mark C. Jackson’s fine take on every Americana songwriter’s favorite subject – The Road. Doug Figgs and Todd Carter wrote Charlie & Evangeline, a timeless Western tale of misfortune and gunplay that was recorded by Figgs, winding up as a winner of the 2015 Spur Award.
The CD closes with a newly recorded theme song by prolific author, former NYC firefighter and WWA member Bill Groneman, a heartfelt acknowledgement to the organization titled Western Writers of America.