ENCAMPMENT, Wyo. – Will Bagley, a journalist known for monumental nonfiction books about the Mormon West and overland trails, will receive the 2019 Owen Wister Award for Lifetime Contributions to Western Literature from Western Writers of America (WesternWriters.org).

Bagley will also be inducted into the Western Writers Hall of Fame, housed outside the McCracken Research Library at the Buffalo Bill Center of the West in Cody, Wyo.

“People either love or hate me,” said Bagley, who lives in Salt Lake City. “The Wister Award is an expression of affection from my WWA friends that is appreciated and humbling, for it calls to mind the words ‘I am not worthy!’” 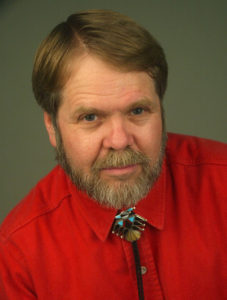 The nonprofit guild’s highest honor will be presented during Western Writers of America’s convention June 19-22 in Tucson, Ariz.

Bagley is a three-time winner of WWA’s Spur Award for “Blood of the Prophets: Brigham Young and the Massacre at Mountain Meadows”; “The Mormon Rebellion: America’s First Civil War, 1857-1858”; and “With Golden Visions Bright Before Them Trails to the Mining West, 1849–1852,” all published by the University of Oklahoma Press.

“Will is not just a tenacious researcher, he is a brilliant writer,” WWA executive director Candy Moulton said. “His ‘Blood of the Prophets’ is a classic – impeccably researched and written with precision.”

Bagley’s other books include “South Pass: Gateway to a Continent” and “So Rugged and Mountainous: Blazing the Trails to Oregon and California, 1812–1848,” both Spur Award finalists.

The Wister Award is a bronze statue of a buffalo created especially for Western Writers of America by artist Robert Duffie.